beautiful, eye-catching mural on the Lesher Center for the Arts 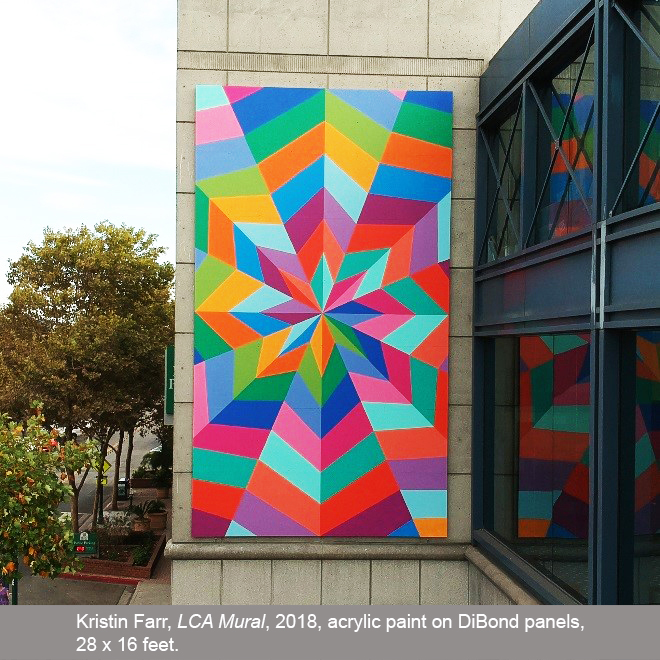 The City of Walnut Creek is pleased to announce the completion of a major work of public art by Bay Area mural artist Kristin Farr. Prominently located on an exterior wall of the Lesher Center for the Arts, overlooking the plaza at the intersection of Locust Street and Civic Drive in downtown Walnut Creek, this vividly hued mural features a symmetrical geometric design in the form of a radiating star. The design interacts with the existing wall (which is perfectly flat) to create a three-dimensional illusion effect that makes the wall look slightly folded or bent by the contrast in color values.

The mural was hand-painted on site by Farr using no masking tape or straight-edge tools. She selected a customized palette of 16 colors in response to her impressions from walking around downtown Walnut Creek, and asking passersby “what’s your favorite color?” Noting that the Lesher Center and the new mural mark the northernmost point of the City’s downtown Arts District, Walnut Creek Mayor Justin Wedel observes that “this vibrant, eye-popping work of art will catch the imagination of viewers and serve as a bright and colorful signpost for the Arts District”.

With Farr’s mural, the City of Walnut Creek is inaugurating a program to create murals on publicly visible walls throughout the downtown area. For the Lesher Center specifically, a mural wall was constructed to serve as the “canvas” for murals that will change periodically. Farr’s mural will be displayed for up to five years before a new mural concept is solicited from artists.

Kristin Farr’s paintings are directed by color and influenced by folk art practices. Her brightly colored, often geometric designs create a three-dimensional illusion that is both playful and captivating. Farr’s Magic Hecksagon paintings are a nod to her family’s roots in Pennsylvania Dutch folk art.