Sure Enough now on view at Civic Park! 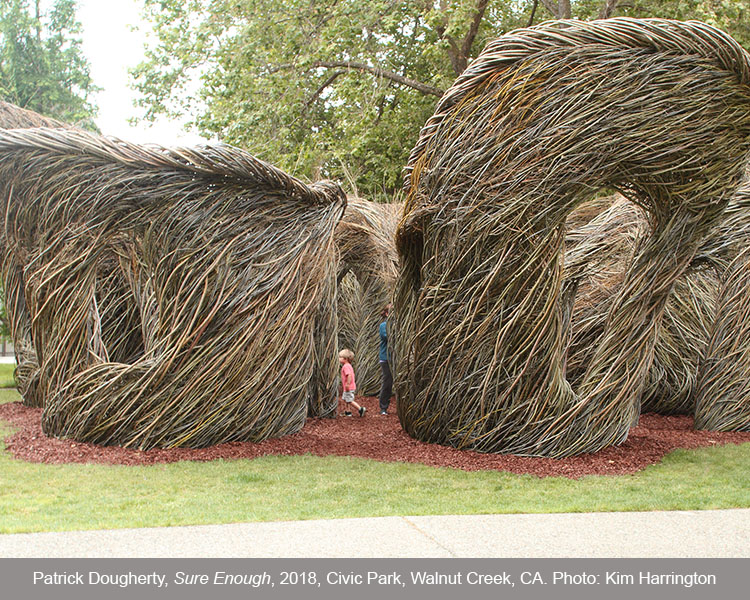 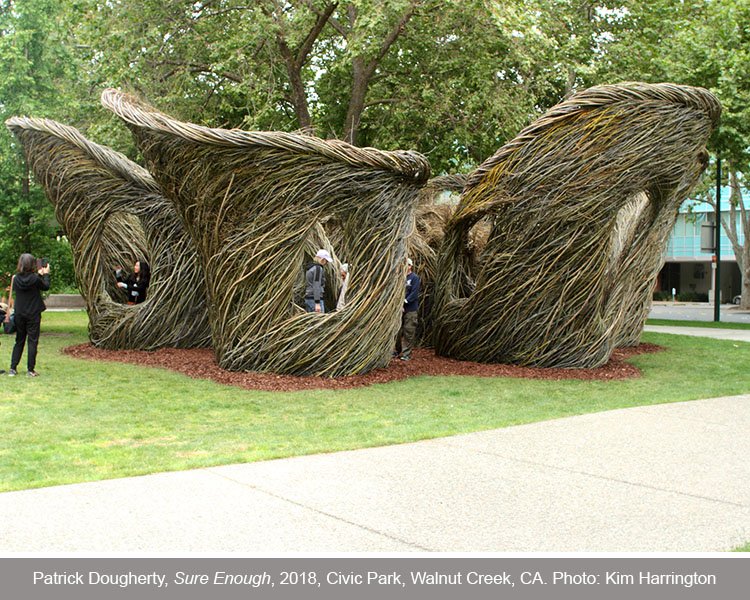 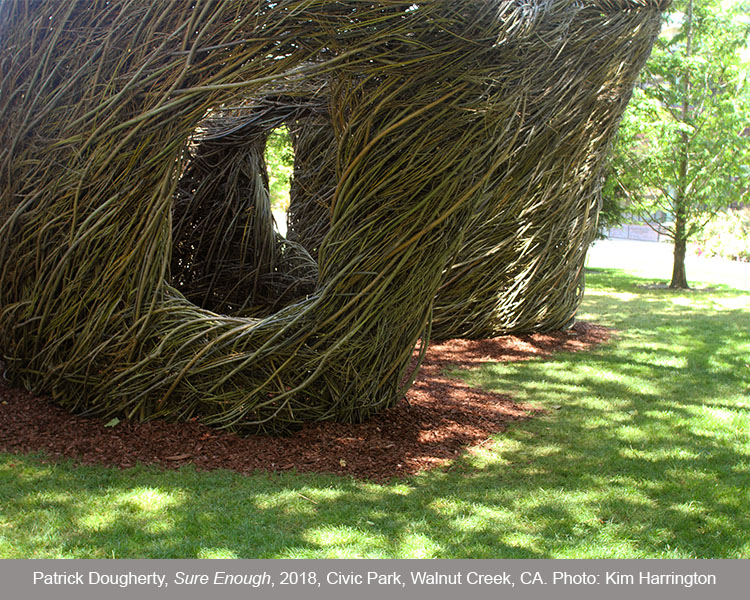 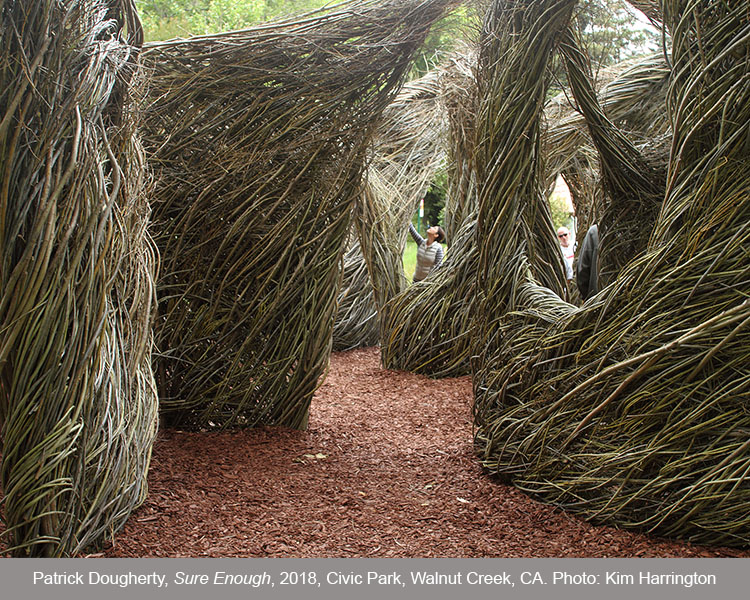 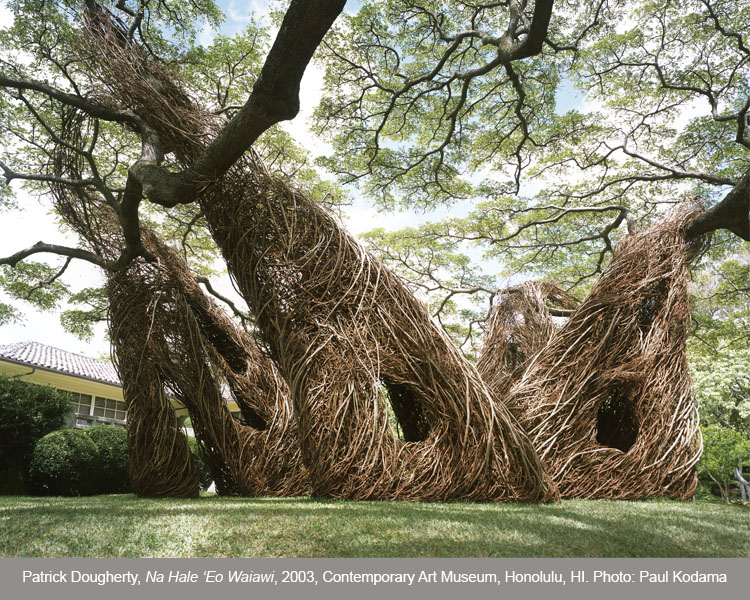 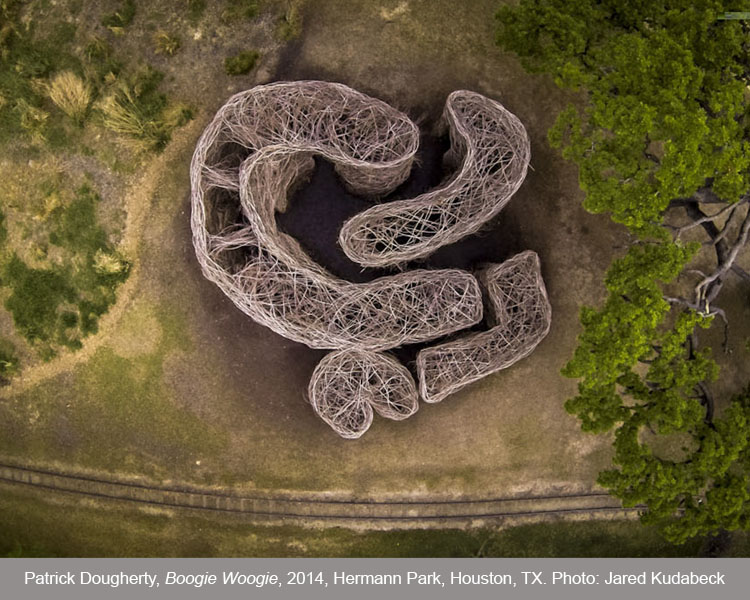 On May 2018, over 60 volunteers from the greater Walnut Creek community came together to help renowned public artist Patrick Dougherty build one of his signature stickwork sculptures in the city. Located just north of the Walnut Creek Library in downtown Civic Park, Sure Enough is a massive labyrinth of woven willow saplings, inviting visitors to wander through and immerse themselves in its beautiful, natural environment. The dynamic sculpture is made up of six linked structures and stands 17 feet high and 37 feet in diameter. This epic public art project was made possible by a National Endowment for the Arts (NEA) grant secured for the Bedford Gallery and the City of Walnut Creek Public Art Department and will be on view at Civic Park in Walnut Creek for two years.

Based in Chapel Hill, NC, Dougherty has received numerous awards and built more than 250 artworks across the US and the world. His signature sculpting style combines a love of carpentry and nature to create monumental environmental works that invite active participation to install and view.

Most of the volunteers, ranging in age from 16 to 69 and coming from many different backgrounds, had never worked on a large-scale, collaborative project like this before, though several are already active volunteers in the community. Many of them came away with new appreciation for the physical labor and precision involved, plus a sense of pride and close connection with the work.

This project is inspired by the idea that art is for everyone.

“Our main goal with this project is to engage the community in and around Walnut Creek by involving them in the creation of public art,” says Bedford curator Carrie Lederer. “We want to broaden the audience for the City’s public art program and find new ways to involve all those in our community who are drawn to urban art, but have not have had the opportunity to be engaged.”

Patrick Dougherty is based in Chapel Hill, North Carolina—he is known around the world for his signature sculpting style that combines master carpentry skills with a love of nature and experimentation. His innovative design and construction projects are large enough to walk in and around, and can be found in parks and public settings across the United States and the world including Washington, D.C., Philadelphia, Portland, Nashville, and Houston.

About the National Endowment for the Arts

Congress established the NEA in 1965 and it remains “the independent federal agency whose funding and support gives Americans the opportunity to participate in the arts, exercise their imaginations, and develop their creative capacities.” Learn more: https://www.arts.gov/about-nea