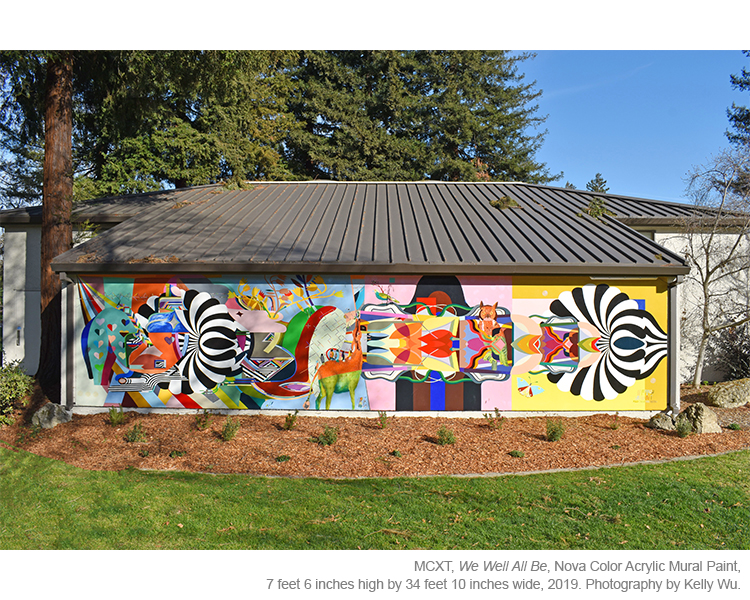 This vibrant mural was painted in the artists' signature style with brilliant colors and a rich mix of narrative and abstract shapes. To create the mural, the artists hand-mixed 90 custom colors over the course of two days. The resulting viewing experience is similar to looking into a kaleidoscope. The meticulously painted patterns create an optical wonderland for eyes to explore. The lovingly rendered details in the mural allow for an interactive and playful opportunity for viewers.

Emerging from the pulsating backdrop are a family of animals including a deer, a group of singing birds, and an owl. All of these Walnut Creek native creatures were placed in the mural as a reminder to viewers of their connection to their ecosystem. Those who look even more closely at the mural will find several hidden words tucked into the details of the painting. These words form the title of the mural “We Well All Be”, and refer to the symbiotic relationship the artists hope viewers will contemplate. Monica Canilao and Xara Thustra explain:

We would hope that 'we will all be well'… but that is on us to decide. In our ecosystem the health and prosperity of one thing affects the other... when one thrives all thrive, when we hurt the environment all creatures feel the effects. We animals, humans, plants and nature are all connected and this image is a reminder of that deep bond. Same molecules and same future… we all came from stardust and will return to stardust and it is what we do with our time that matters.

This effervescent mural enhances and enlivens the urban streetscape of the downtown core, adds to Walnut Creek’s burgeoning mural collection, inspires enthusiasm for public art and creativity in the community, and enriches Walnut Creek’s Public Art Walking Tours. Bedford Gallery and the Public Art Program are incredibly proud to present this unique and enriching creation by MCXT to the Walnut Creek community.

About MCXT
MCXT is a creative partnership between Monica Canilao and Xara Thustra. A collaborative effort birthed out of a joint wish to communicate care and empowerment within public spaces. To place special emphasis on putting the most vulnerable people in society first. Together the artists share a deep need to make a bright, vibrant world using the tools of art and activism. MCXT goes big in scale, in heart, and in vision. They create moments to think and reflect on what things might look like if every human were to practice care for others. There is an important, whimsical seriousness aimed to direct the viewer's attention to the bright, bustling, heart-wrenching beauty that is all around… A reminder that what’s here is enough and vast, it’s simple and infinite. MCXT wakes the sleepy-eyed passerby to gaze into an altered state, refocus and incite joy. 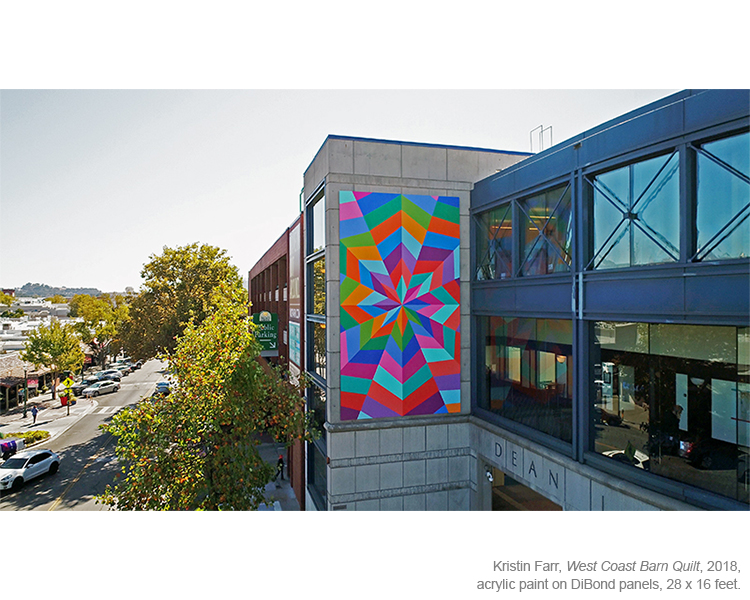 In the Fall of 2018, Bay Area artist Kristin Farr inaugurated Walnut Creek Public Art's mural program. Prominently located on an exterior wall of the Lesher Center for the Arts, overlooking the plaza at the intersection of Locust Street and Civic Drive in downtown Walnut Creek, this vividly hued mural features a symmetrical geometric design in the form of a radiating star. The design interacts with the existing wall (which is perfectly flat) to create a three-dimensional illusion effect that makes the wall look slightly folded or bent by the contrast in color values.

The mural was hand-painted on site by Farr using no masking tape or straight-edge tools. She selected a customized palette of 16 colors in response to her impressions from walking around downtown Walnut Creek, and asking passersby “what’s your favorite color?” Noting that the Lesher Center and the new mural mark the northernmost point of the City’s downtown Arts District, Walnut Creek Mayor Justin Wedel observes that “this vibrant, eye-popping work of art will catch the imagination of viewers and serve as a bright and colorful signpost for the Arts District”.

Kristin Farr's mural was constructed to serve as the “canvas” for artworks that will change periodically. Farr’s piece will be displayed for up to five years before a new mural concept is solicited from artists.

Kristin Farr’s paintings are directed by color and influenced by folk art practices. Her brightly colored, often geometric designs create a three-dimensional illusion that is both playful and captivating. Farr’s Magic Hecksagon paintings are a nod to her family’s roots in Pennsylvania Dutch folk art.